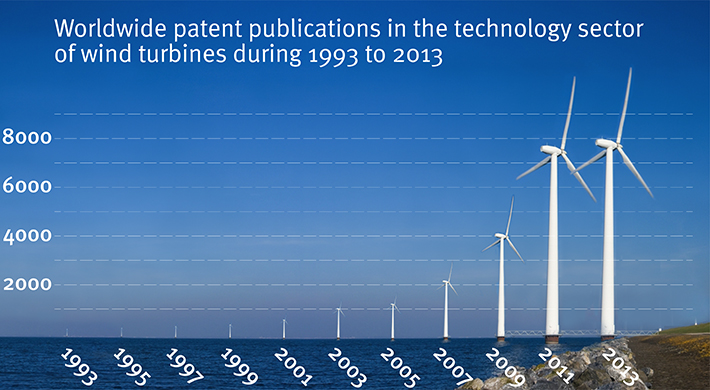 Even in old Egypt 7,000 years ago, wind energy was used for powering ships. About 3,700 years ago the first windmills were built for irrigation projects. Hence, the technique to convert wind power into rotational energy is not new and has been permanently improved over time. The first wind turbines, based on the same principle as today`s wind engines, can be seen as the direct successors of windmills and were used for electricity generation as early as the 19th century. For 10 to 15 years and especially after resolving the "Energiewende", wind turbines have been a common sight in the German landscape, and their number is steadily increasing. In view of this, one may well ask whether this kind of technology still has any potential for innovation.

The multitude of news and publications about wind power published by BINE Information Service – Energy research for application shows that there is still much room for optimization in the field of wind turbines, and that scientists are aware of this. The most recent publication entitled "Laser supported remote diagnosis for rotor blades" is about laser beams being used from a distance of 1,000 m to measure the vibration of the wind turbines in order to identify maintenance needs. Wind power plays a key role in the "Energiewende": Particularly extensive uses of offshore or low mountain range wind power are major technical and logistical challenges engineers and technicians have to cope with. Wind turbines have not only been optimized with regard to rotor blades, but also with respect to maintenance, the assembly of offshore arrays, the better adjustment to geographical conditions, the controlling means, network integration, new materials, and harvest optimization. This suggests that wind energy could in fact be an ideal field for researchers and developers.

Actually, a strong increase in innovation is going on in this field. A broad search of the STN patent database DWPI (Derwent World Patents Index) on the topic of wind turbines proves this. The search was conducted with new STN Version 2. Because of the extremely flexible system limits regarding the hit quantity and statistical analysis it is now possible to statistically evaluate results from more than 50,000 patent documents.

The statistical evaluation of the number of hits per patent assignee reveals that four companies stand out: The number of patents filed by General Electric Co, Siemens AG, Vestas Wind Systems AS and Mitsubishi exceeds that of all other firms by far. Due to their technical superiority, these companies currently dominate the innovative developments in this sector.

The fact that about 8,000 patents are published in the field of wind energy each year shows that there is still a huge innovation potential in the mentioned technology. Therefore, we may be curious about the developments in the years to come.

Almost anecdotic appears the search result in early patent documents in the field of wind energy: Maybe it is no coincidence that the first two patents from Spain (ES 1 and ES 2 from 1836) – the country of Don Quixote – are dealing with windmills.