The art of plastics recycling

Plastics have many positive and unique properties: Depending on their type, they can be extremely flexible, elastic or rigid, water-insoluble, sticky, thermoplastic, lighter than water, impact-resistant, sometimes birefringend, transparent or opaque, non-conducting, stronger than steel, and they seem to be ever-lasting. But despite their broad range of properties, all plastics share the same basic molecular structure. They all consist of long chains of repeating molecular units that are aligned like pearls on a string. The German chemist Hermann Staudinger is considered the discoverer of this substance class of macromolecules. In 1953 he was awarded the Nobel Prize for his work on the structure of plastics. 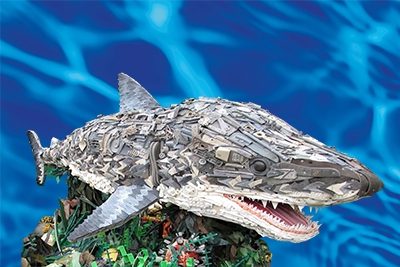 shark sculpture made entirely of plastic pollution fished from the oceans, © WashedAshore.org

Where does the word "plastics" come from?

“Plastics” is etymologically derived from the Greek terms “plastike” (the art of sculpture) and “plassein” (to build, to form). So originally the word was about the art of building or forming something.

Plastics are a relatively new class of materials in chemistry and only were developed in the course of the last 150 years. Nowadays the corresponding scientific discipline is called polymer chemistry or macromolecular chemistry. One of the first German enterprises producing plastics on a large scale was BUNA-Werke in Schkopau. It was founded in 1936 and produced synthetic caoutchouc made of Butadien and Natrium – hence the names BUNA-Werke and Buna rubber. Already at an early stage, BUNA-Werke registered the trademarks “Plaste” for rigid plastics and “Elaste” for elastic plastics. In the 1950s the BUNA advertising slogan read:”Plaste und Elaste aus Schkopau“ (Plaste and Elaste from Schkopau). Plastics from the “Plaste” group were thermoplastic (PVC etc.). This property applies to many of today’s mass-produced plastics. Thus the trademark “Plaste” was transformed into the term “Plastik” that is used in many languages (English: plastic, French: plastique, Spanish: plastico, Italian: plastica).

The first fully synthetic plastics were produced in the early 20th century1, and the products that were made from them became very popular in the industrialized countries: plastic bottles, foils, and wrappings were light, hygienic, and at the same time cheap. Thus, the first disposables emerged, which also led to a changed consumer behavior. By now, plastic items have become bulk commodities. They are often designed for single use only and automatically turn into garbage afterwards. Plastics have conquered the world, and people’s everyday lives, no matter where, would be unthinkable without them.

However, it is becoming increasingly evident that we pay a high price for our throwaway mentality. There are more and more reports about huge fields of plastic garbage floating in the oceans. In the Pacific Ocean, these fields have grown to the size of Central Europe. According to estimates by Greenpeace2 the oceans already contain at least 150 million tons of plastic garbage, with 13 million tons added each year. Plastic residues are found in the stomachs of fishes and other marine organisms. Sea birds die because they have swallowed plastic garbage. But not only the visible garbage is an issue. Over the years, plastic garbage is pulverized into minuscule particles smaller than one mm. Marine organisms take these micro-particles for plankton and eat them, so that they accumulate in the tissue of these organisms. At the end of the food chain are the humans who, on their part, ingest these micro-particles by eating contaminated fish.

Unfortunately, the full consequences of an initially praised property of plastics were not considered: Plastics are very durable. It takes many decades, or even centuries, for plastic garbage to decompose. This makes plastics an extremely problematic type of garbage. Their longevity is due to their molecular structure. The long chain molecules are chemically very stable and do not easily disintegrate into their basic components. Therefore, plastic garbage does not rot but accumulates to giant piles of garbage, both ashore and in the oceans.

From an economical point of view, however, plastic garbage is much too valuable to be thrown away. Only gradually people start to realize that plastic garbage is a kind of resource. This is due to its production process. In order to produce plastics, macromolecules are built from many similar individual molecules, the monomers. However, these monomers are usually extracted from mineral oil. Therefore it would be a good idea to recycle plastic garbage or to use it as a source of energy.

In view of the facts outlined above it makes sense to perform a patent search to find out whether the market potential of plastic garbage has been recognized and whether this has resulted in intensified R&D activities. Our patent search was carried out and analyzed in the Derwent World Patent Index (DWPISM) database on the new STN platform. We did a keyword search combined with relevant classifications from the International Patent Classification (IPC) and the Cooperative Patent Classification (CPC).

An analysis of the search results shows that plastics recycling is an innovative field of technology, but there has never been a hype about it. Looking at the patent applications filed since the year 2000, we find that for many years their number had been slightly varying, but not increasing. Their average value seems stable. Only from 2013 on there is a moderate increase of worldwide patent applications. It remains to be seen whether this is a permanent trend. The numbers of publications from 2016 are not yet reliable and were therefore disregarded. The diagram below shows the international patent applications from the last 15 years.

The patent search also shows that there are enough technical solutions to cope with the flood of plastics garbage. Below we will present some ideas for plastics recycling.

Let’s get back to the huge fields of plastic garbage floating in the oceans. This serious environmental issue requires innovative solutions. One obvious solution is purely mechanical. The dockyard Lübeck Yacht Trave Schiff GmbH has developed a special catamaran called Seekuh (Sea Cow). It is intended to remove plastic garbage residues from the ocean by means of a movable net that is installed between the hulls of the catamaran. According to the plan of its inventors, the Seekuh should be able to collect up to 2 tons of garbage with each tour and transport them ashore for further processing.

The first garbage collecting tours were planned for summer 2016. The Seekuh is powered by solar energy and can be completely dismantled so that it can be stored in containers and shipped to any location in the world.

On the other side of the globe, Australian inventor Wolfgang Flatow had a similar idea and also filed a patent for it (AU2015100062). Like the Sea Cow, Flatow’s “solar robotic barge” is a type of solar-powered catamaran. It is unmanned and can navigate almost autonomously. By means of satellite navigation the floating garbage collector has to find the fields of floating plastics, to collect the garbage autonomously, and to transport it to the nearest port.

These innovations can help to remove large plastic items from the ocean, but as yet there is no viable solution for the removal of micro-particles.

However, this is just the first step. Once brought ashore, the plastic garbage has to be further processed. Up to now, this has been done in incineration plants with a subsequent elaborate flue gas cleaning. Despite the flue gas cleaning, these plants are not widely accepted by the public.

For a more eco-friendly onshore recycling of plastic waste, the company Ecoloop had the smart idea to use a well-established technology used in lime-burning processes for a new purpose. Unsorted plastic garbage is shredded and mixed with coarse lime. Even problematic plastic garbage and contaminated material can be directly processed, without the need of a prior preparation. The mixture of lime and garbage is fed into a shaft kiln from the top and transformed into synthetic gas by countercurrent exchange. The cleansed end product, i.e., the synthetic gas, can then be used as a resource in the chemical industry or as a replacement of natural gas. The lime plays a key role in this process. It absorbs chlorine and thus prevents the formation of highly toxic dioxins and furans. That these toxic substances are produced, for example, by burning PVC (polyvinylchloride) is a well-known issue. The process invented by Ecoloop does not generate dangerous flue gas – a great advantage compared to usual incineration plants. At present, the process is tested in a pilot plant, and the technology has already been filed for patent protection.

A complete description of the project is available on the homepage of “BINE Informationsdienst”. 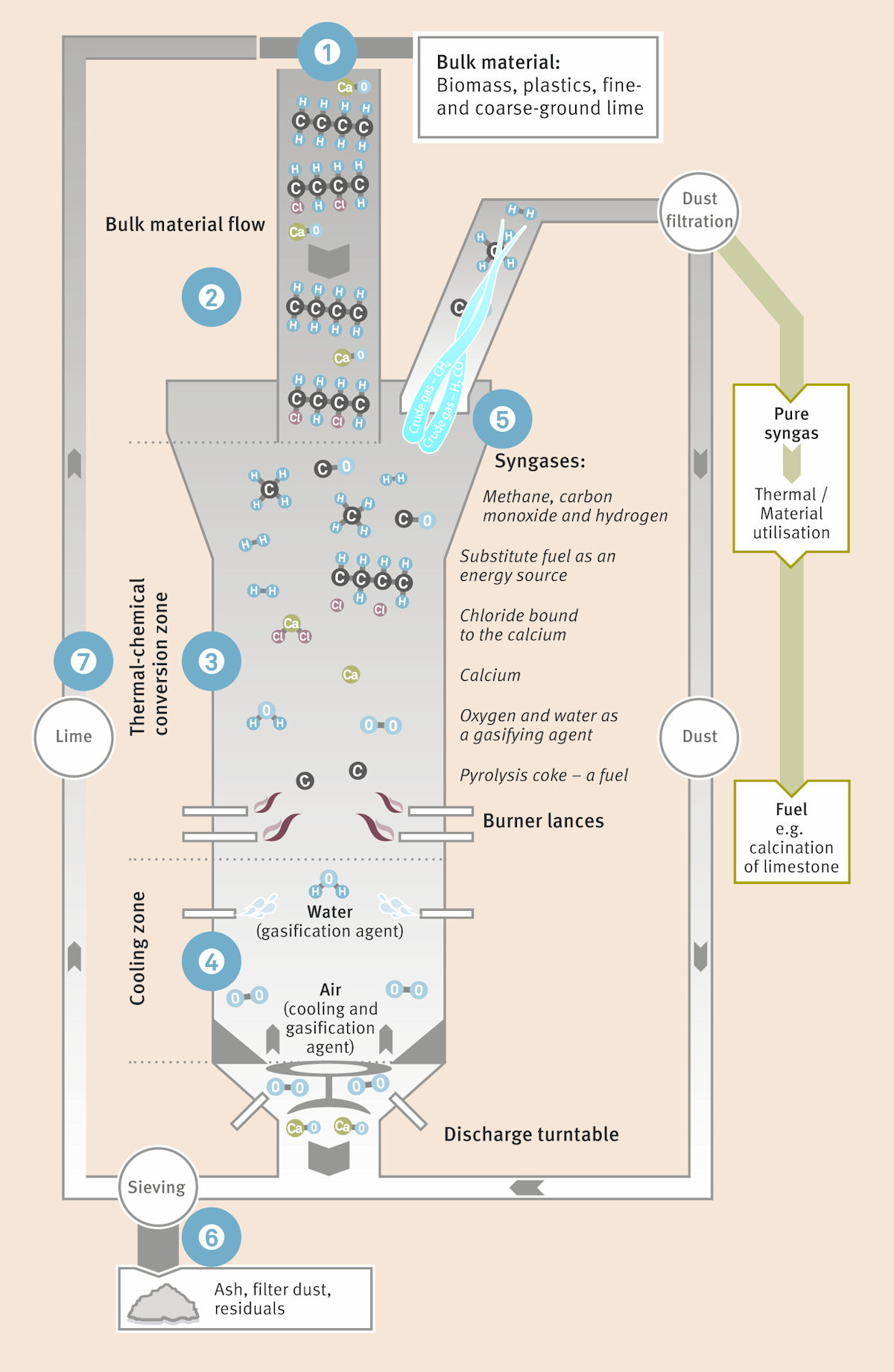 Is there a natural solution?

Maybe mankind will be lucky and the plastic garbage issue will take care of itself. Japanese researchers have discovered a bacterium that preferably feeds on polyethylene terephthalate (PET) and transforms it into energy, carbon, and water during its metabolic processes. PET is widely used, for example, to produce plastic bottles. The newly discovered bacterium is called Ideonella Sakaiensis 201-F6. It probably only evolved after PET waste occurred in nature. One might say the bacterium has undergone a process of “turbo evolution” in order to optimally adapt to its plastic fodder. Research on Ideonella Sakaiensis 201-F6 is still in its early stages. It seems that the decomposition of PET by bacteria is a relatively slow process and requires ideal conditions, e.g., an environmental temperature of 30°C. But researchers are already thinking of future uses. So one day it might be possible to breed bacteria that were specifically designed to digest certain types of plastics. 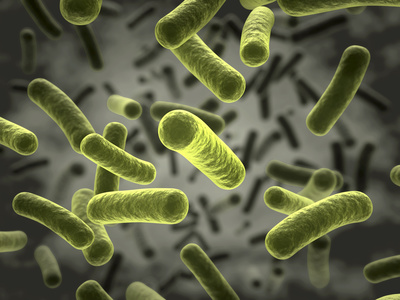 “Turbo evolution” enables the bacterium to optimally adapt to its plastic fodder.