Success in the renowned Leibniz competition: The Senate of the Leibniz Association approves of the TRANSRAZ project. The world’s cultural heritage that cannot be recreated in reality is made available to a broad public on a sustainable basis.
Contact 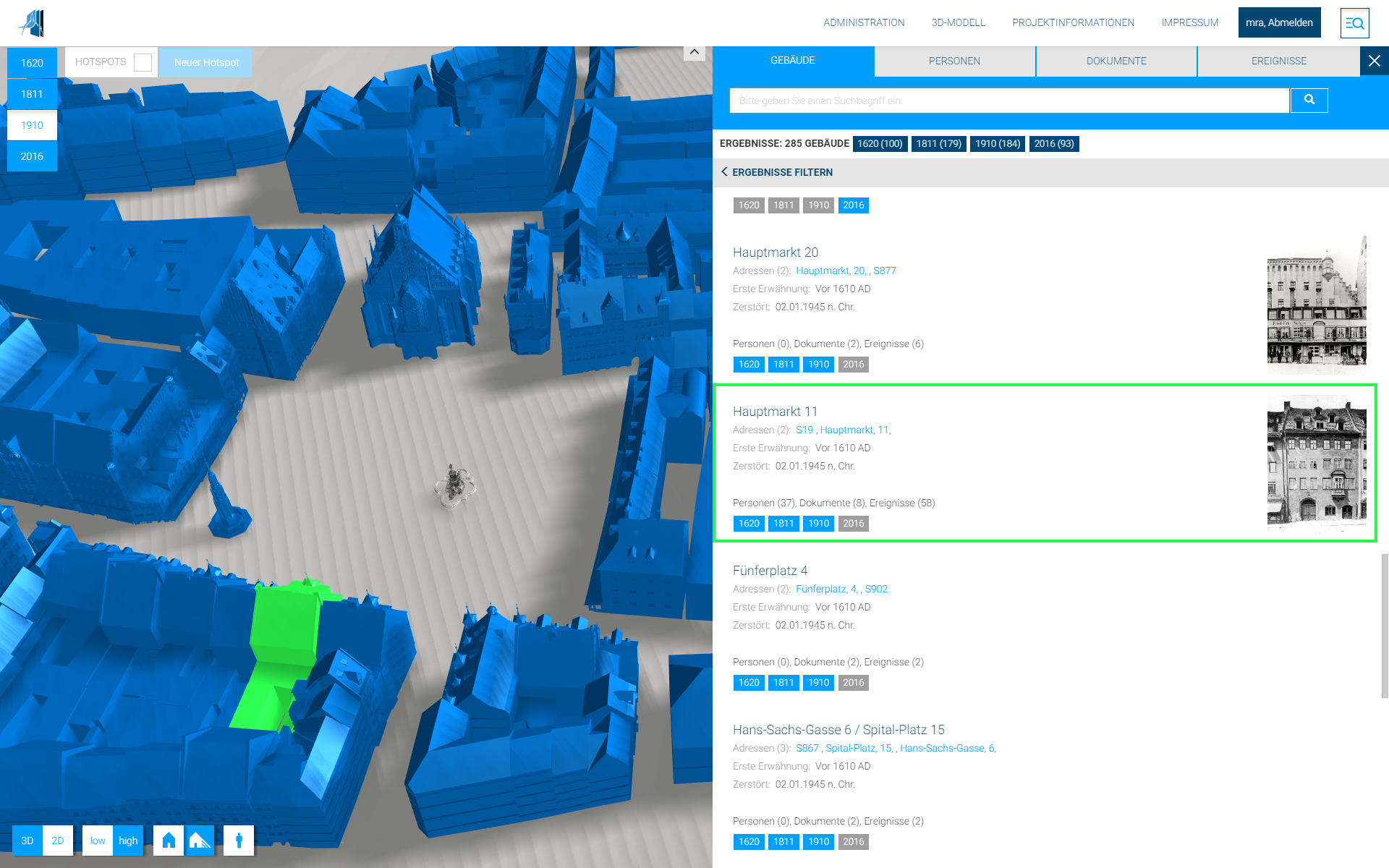 Karlsruhe, December 11, 2019 — Until its almost complete destruction in WW II, the city of Nuremberg had been one of the great European metropolises. Its historical cityscape was regarded as a total work of art. In three years of interdisciplinary collaboration, a science network led by FIZ Karlsruhe has developed an innovative virtual research environment that revives, documents and visualizes that which was destroyed. The knowledge gained in the process is now to be expanded, communicated to a broad public and made available for sustainable use.

The fire at Notre Dame Cathedral in Paris on April 15, 2019 made blatantly clear to what extent objects of cultural heritage are historically and socially relevant and at the same time highly vulnerable. Nuremberg's historic center played a similarly important part in European culture as the cathedral in Paris. With the TRANSRAZ project, FIZ Karlsruhe and the University of Greifswald want to make their jointly developed knowledge repository, i.e., the virtual research environment on the cultural heritage of the city of Nuremberg, available to the public for sustainable use. Applications in the field of educational institutions and museums are planned; hotspots with special information on selected places can already be set up according to interest and without limits. This allows for themed tours along the historical layers of time through the city, also giving an insight into city life in those times. The world’s cultural heritage that cannot be recreated in reality will be revived as a virtual place of remembrance. At the same time, the state before the destruction will be systematically and scientifically investigated and documented. This has not been done before.

Renowned partners in science, in the public and in the commercial sector are supposed to impart this knowledge. For example, the Nuremberg city archive wants to use the virtual research environment in the long term and complement it with its own data, for example, with extensive information (texts, images, maps, sound documents) from the city's house book currently in progress.

Another aim of this novel transfer project is the interaction with citizens. To this end, an interactive participation platform is to be added to the projected city model. The citizens of Nuremberg can use this platform and enrich it with their own information. They often have knowledge about their districts, houses and apartments that is unknown to researchers. In this way, entirely new source material can be made accessible - for example, photographs from the time before WW II that show external facades or interiors prior to their destruction.

Sabine Brünger-Weilandt, President and CEO of FIZ Karlsruhe, emphasizes: “Sound and objectively verifiable knowledge about the past is essential for understanding the present, for assessing things that are different, and for generating tolerance towards everything that seems strange at first glance. Communicating this knowledge and its underlying findings is a central task for us as a Leibniz Institute for Information Infrastructure“.

With regard to the Leibniz competition procedure, she continues: "Another goal of the Leibniz competition is to stimulate strategic collaboration with universities and the targeted promotion of highly qualified young scientists. I am therefore very pleased that, together with the University of Greifswald as a research partner, we have been successful in this highly competitive procedure for the second time. In addition, we can now offer a further perspective to the young team of scientists already involved in the predecessor project”.

The predecessor project TOPORAZ – Nuremberg‘s Topography in Space and Time

A joint interdisciplinary project network of FIZ Karlsruhe and the universities of Greifswald, Cologne, and Darmstadt had broken new ground in 2015. Three-dimensional digital models reconstructed Nuremberg's urban space around the old city's main market square in four time levels from the Baroque period to the present (17th to 21st century). They were networked with numerous historical sources and images. Within three years, a virtual research environment was developed that opens up new perspectives for research into Nuremberg's history and culture in the course of time. It should now provide new insights as well as inspiration for the interested public to participate.

More information on the TOPORAZ project is available on the website of FIZ Karlsruhe and at http://www.toporaz.de

FIZ Karlsruhe – Leibniz Institute for Information Infrastructure is a not-for-profit limited liability company. As one of the largest non-academic information infrastructure institutions in Germany, we have the public mission to provide researchers and scientists with scientific in-formation and to develop the appropriate products and services. To this end, we edit and index large data volumes from manifold sources, develop and operate innovative information services and e-research solutions, and carry out research projects of our own. FIZ Karlsruhe is a member of the Leibniz Association which comprises more than 95 institutions involved in research activities and/or the development of scientific infrastructure.