How meaningful are epidemic models? An analysis and assessment by the mathematicians of zbMATH.
Contact

In this second contribution, we will focus on the epidemic of Severe Acute Respiratory Syndrome (SARS) caused by the Coronavirus SARS-CoV. This epidemic started on November 2002. We will review antecedents of this disease, look at two epidemiological models and discuss some of the measures taken during that period of time.

2 Some antecedents on SARS

According to estimates of the World Health Organization (WHO) around 8,096 individuals were infected with SARS and 774 deaths were registered due to SARS in 55 countries [5]. The symptoms of SARS are very similar to those caused by many common respiratory pathogens (inﬂuenza viruses, Mycoplasma pneumoniae, Coxiella burnetii, etc.). In order to achieve an accurate diagnosis, the following symptoms were considered as clinical evidence of SARS [5]: documented fever ≥ 38 ◦C, one or more symptoms of lower respiratory tract illness (cough, diﬃculty breathing, shortness of breath), radiographic evidence of lung inﬁltrates consistent with pneumonia, and the fact that no other alternative diagnosis can fully explain the disease. The diagnosis of SARS in the laboratory was mainly achieved by reverse transcription polymerase chain reaction (RT-PCR) from at least two diﬀerent samples. This same method is used at the present time for testing the virus SARS-CoV-2. Serological tests were also developed and performed for SARS.

It is believed that the SARS-CoV virus is an animal virus that crossed to humans, when more contact between animals and persons took place, allowing the exposure to the virus to increase, and the virus to adapt [1]. The natural reservoir of SARS-CoV has not been identiﬁed yet but a number of wildlife species have been shown to be infected with a related coronavirus.

The ﬁrst case of SARS occurred in November 2002 in the Chinese province of Guangdong. It was at the end of February 2004 that the SARS spread worldwide when a doctor of Guangdong infected several individuals at a hotel in Kowloon, Hong Kong. Later, the disease spread by air travel. It is also known that short visits to epidemic regions resulted in infections. The outbreak of SARS was taken under control at the end of 2003, the last reported human chain of infection was broken in July 2003. However, separate outbreaks of SARS appeared later in Singapore, Taiwan and China. Three of these outbreaks were attributed to breaches in laboratory biosafety [5]. SARS posed a serious threat to the medical community because of the high number of infected health-care workers. This disease had also a severe adverse economic eﬀect in some regions of East Asia; it was actually worse than the previous disruptions caused by the avian inﬂuenza [4].

3 A SEIJR compartmental model for SARS

Many papers studying SARS appeared in 2003, many of them in Chinese journals, which were poorly available to international researchers. Most of the research of the virus took place in China, where the SARS epidemic hit the hardest.

In the last contribution we considered a model with susceptible, infected and recovered individuals. We will now explore a more complicated model with susceptible, exposed, infected, diagnosed, and recovered classes of individuals, which in the literature is known as "SEIJR". This particular model was developed by Chowell et al [2] based on data from Toronto, Hong Kong and Singapore. It was observed that the epidemic dynamics for Hong Kong and Singapore appeared to be diﬀerent from the dynamics in Toronto, Ontario. The diﬀerence could be attributed to variations in contact rates, age-dependent susceptibility or unknown "genetic" (or other) factors. To handle this situation the authors introduce two diﬀerent susceptible classes: S1 the most susceptible and S2 the less susceptible, which reﬂects more the reality since human populations are heterogeneous. People are more susceptible because of preexisting health conditions or because they live in an epidemic zone. The compartmental model they proposed is given by a system of ordinary diﬀerential equations: 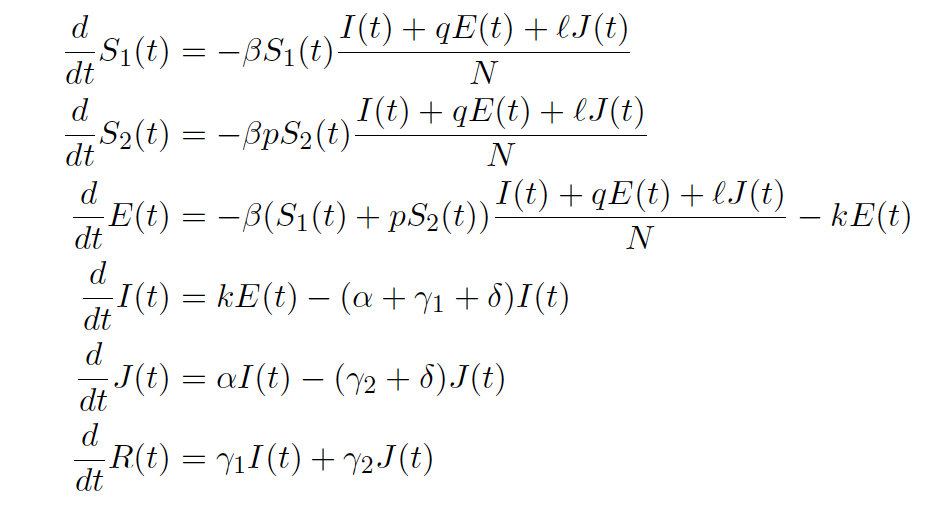 The total of the population is N = S1 + S2 + I + J + R. At the beginning, S1 = ρN and S2 = (1 −ρ)N , where ρ is the proportion of the population that is at higher risk of getting infected. Parameter p is a measure of reduced susceptibility to the infection in class S2. β is the transmission rate per day. Class E denotes the "exposed" individuals, asymptomatic but possibly infected. The possibility of transmission from class E is included with a parameter q. Class I represents the symptomatic, infected and undiagnosed individuals. The I-individuals evolve into class J of diagnosed persons at the rate α. The individuals recover at the rate γ1 for class I and γ2 for class J . The class of recovered individuals R keeps track of the number of diagnosed and recovered individuals. Parameter δ indicates the SARS-induced mortality. The model also assumes that the individuals are carefully treated and diagnosed, therefore they are not as infectious as those who are not diagnosed. Finally parameter ℓ is a measure of the reduced impact of those individuals who are diagnosed, a small value of ℓ indicates that eﬀective measures were taken in order to isolate diagnosed cases.

The following ﬂow diagram summarizes the evolution of classes in this model. Note that not all exposed individuals have to evolve to class I of infected persons. Only a proportion of them will be infected. 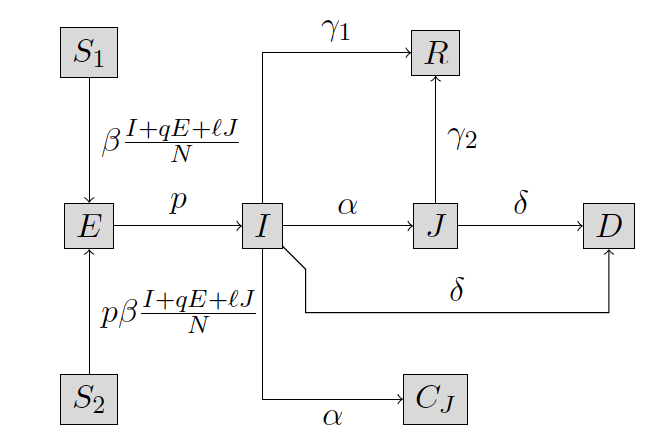 Quantity CJ is included only for comparison with epidemiological statistics. It tracks the total number of diagnosed cases. The values of p and q are ﬁxed arbitrarily, since they are not known in advance, while parameters α and ℓ are varied to ﬁt the existing data from Hong Kong, Toronto and Singapore. The other parameters were roughly estimated from literature. In this model, the eﬀect of isolating diagnosed individuals is explored through these parameters.

The authors found estimates of the basic reproduction number R0 ranging between 1.1 and 1.2. They also conclude that the changes introduced after the identiﬁcation of the ﬁrst case result in a dramatic reduction in the number of cases and mortality in Toronto. According to their model, local outbreaks should follow similar pat- terns (even in the presence of superspreaders). Their model is quite sensitive to the parameters ℓ (eﬀectiveness of isolation) and α (diagnostic rate).

4 A SEQIJR model of SARS

The previous model we looked at was developed at the moment that the epidemic was taking place with the data available at that moment, and the model was fitted to those data. A few years later several papers on SARS appeared, and among them paper [6] that considered a SEQIJR model. The population is split into six classes: susceptible, asymptomatic, quarantined, symptomatic, isolated, and recovered individuals. This model was originally proposed in [3]. A system of diﬀerential equations describes this epidemic model:

In this model, the total of the population N = S +E +I +Q+J +R. It assumes a natural death rate µ > 0 in each group of the subpopulations and a constant recruitment rate Λ. This includes the inﬂow of asymptomatic persons into the region at rate p per time unit: new births, immigration and emigration. The transmission coeﬃcients for the four classes of infected individuals are β, εE β, εQβ, εJ β, respectively. An asymptotic person ﬂows into the symptomatic class at a rate k1, and a quarantine individual into the isolated class at a rate k2. The parameters d1 and d2 are per-capita disease induced death rates for the symptomatic and isolated persons, respectively. Likewise, the parameters σ1 and σ2 are per-capita recovery rates for the symptomatic and isolated individuals, respectively. The control variable u1(t) is the rate of quarantining of individuals who have been in contact with an infected person, while u2(t) represents the rate of isolating of symptomatic individuals by an isolation program.

subject to the system (1) and certain boundary conditions. The coeﬃcients, B1, B2, B3, B4, C1 and C2, are balancing cost factors and tf is the ﬁnal time. The main idea is to ﬁnd an optimal control pair of functions u∗1, u∗2 such that

where Ω is a certain space of functions. The so-called Pontryagin's maximum principle provides necessary conditions for ﬁnding solutions to optimal control problems. With this result, the problem is transformed into minimizing a Hamiltonian system H, with respect to u1 and u2. Through numerical simulation based on a genetic algorithm, the authors obtain a suboptimal solution, that means a solution where the functions u∗1, u∗2  are not the global minimum, for the optimal quarantine and isolation control to the problem (3). They compute likewise an optimal solution. The comparison between the suboptimal and the optimal solution is very interesting since both provide very similar performance for reducing the number of infected individuals. In general, for practical implementations it is easier to use suboptimal solutions, since they are less restrictive and the results are similar.

The next ﬁgure was taken from [6] (Figure 4). Here, we can see that the curves corresponding to the optimal and the suboptimal solutions are practically indistinguishable. Both strategies result in the same reduction of the number of infected individuals. 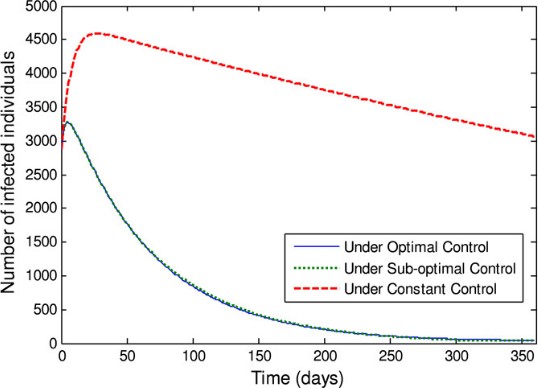