March 8 is International Women's Day. We will take this opportunity to remember some of the outstanding achievements of women in politics, science and society.

From a political point of view, 1918 was an important year for women in Germany, as they were given the active and passive right to vote. Some Scandinavian countries had already taken this step, also Russia in 1917, and other European countries soon followed. It had been preceded by numerous demonstrations and events in Europe and the United States, at which women had demanded their right to vote and their civil rights massively and effectively. The German Digital Library provides easy access to digital witnesses of this time. A search with the keyword "Women's suffrage" in the DDB leads to a large number of interesting and informative documents, such as the flyer on women's suffrage from 1913 written by Clara Zetkin.1

For exactly 100 years now, women have had the right to vote in Germany, and yet to this day women have been experiencing disparagement in politics. A well-known example of this is the remark made by former Federal Chancellor Gerhard Schröder on the occasion of the swearing in of his first federal cabinet2 in October 1998, when he spoke about Christine Bergmanns'3 field of activity: “Ms Bergmann is responsible for women and all that other stuff.“4 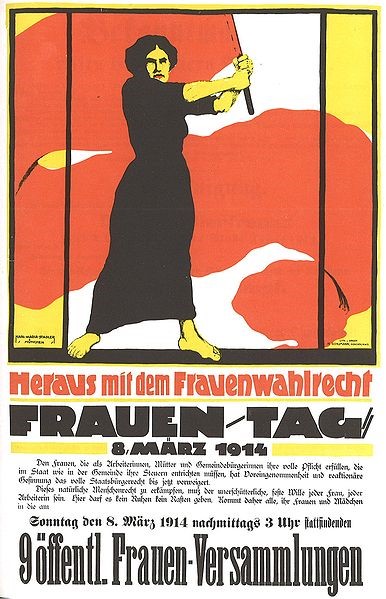 If you would like to find out more about women's suffrage in Germany, we recommend a search in the DDB. The German Digital Library provides a large number of search results on the subject of women's suffrage. A simple search provides access to leaflets, posters and writings that document the women's struggle for their right to vote. The set of hits can be further refined by setting specific filters by topic of interest. FIZ Karlsruhe is the technical operator of the German German Digital Library (DDB) and a partner within its competence network.

Time and again, the achievements of women are talked down, disregarded or dismissed as a fuss. The outstanding achievements of the early deceased Iranian mathematician Maryam Mirzakhani5 could not be put aside.  She was the first and only woman ever to receive the prestigious Fields Medal in 2014. This medal is considered to be the highest distinction in mathematics - and yet the religious authorities in their home country, Iran, found it difficult to fully appreciate their country's daughter, because in the press photos at the award ceremony she did not wear a headscarf, as is prescribed for all women in Iran. Maryam Mirzakhani's research topics, the chronological course of her research activities and the quotations of her works can be viewed online in the author's profile in zbMATH6. The author‘s profile also contains the interactive Wikidata Timeline, as partly shown in figure 2. 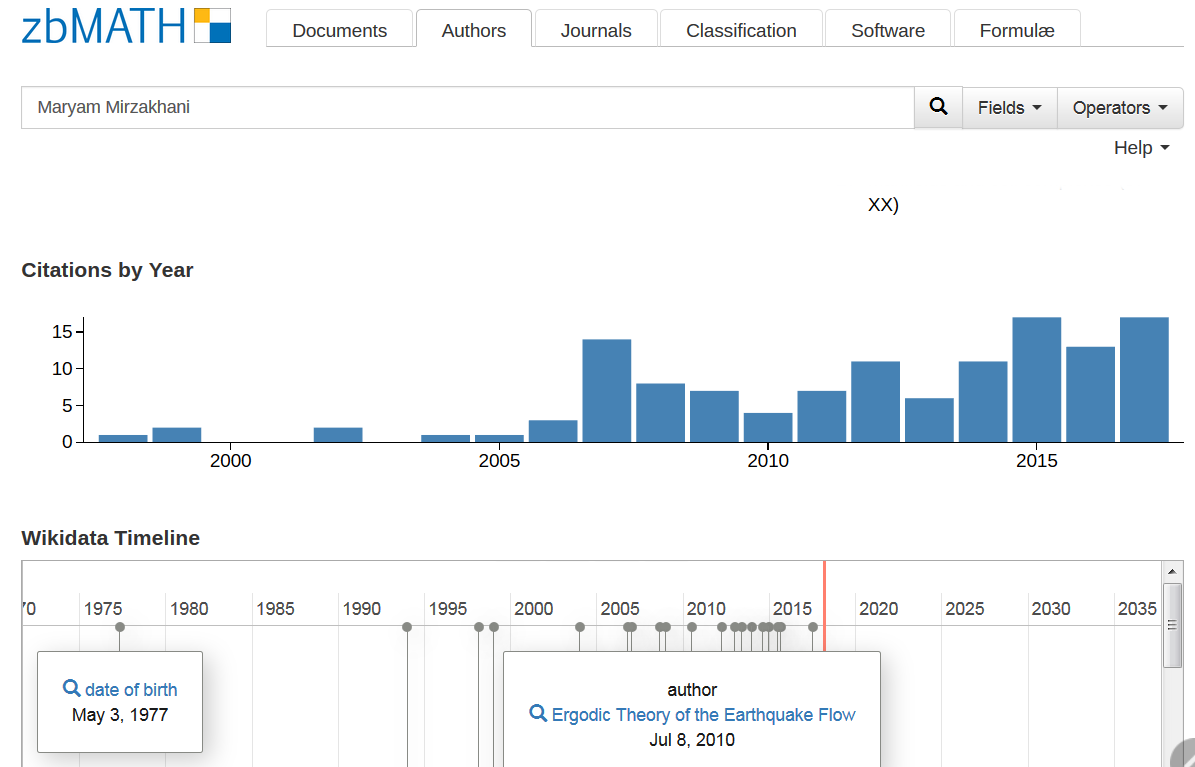 Fig. 2: Excerpt from the author’s profile of Maryam Mirzakhani in zbMATH

is an information service in mathematics with networked information on mathematical topics, authors, publications, references, and software.
read more

Research and innovation go hand in hand. According to the latest data from the World Intellectual Property Organization WIPO, women are currently involved as inventors in 30.5 percent7 of the international patent applications filed through the organization. It is not self-evident that almost a third of international patents come from women, and the road to achieving this is a history full of obstacles and required many small steps. For a long time, women had been denied admission to a university and thus denied access to research. In 1896, the first women passed the Abitur examination at the Luisengymnasium in Berlin, but this did not yet mean they were admitted to a university. The opportunity for women in Germany to study opened up only slowly since the beginning of the 20th century. The forerunner here was the Grand Duchy of Baden, which by decree in 1900 allowed women to study at its universities, followed by Prussia in 1908.8 Admission to higher education was only the first hurdle that women willing to study had to overcome. It was important to survive in a male-dominated world and to fight for one's place in research and teaching. A strong percentage increase in female students at German universities was recorded during the Second World War, as can also be seen in figure 3. Indirectly, the war had a "positive influence" and resulted in women to make up to 45 percent of the students during this time, because their male fellow students were needed as soldiers for the war and withdrawn from the universities. In absolute terms, however, the number of female students was still very small. After the end of the Second World War, the number of women enrolled slowly picked up speed and increased steadily. Currently, the proportion of women at universities is about 50 percent, although the so-called STEM9 subjects still have a lower proportion of women on average. But it is precisely these courses of study that produce the future inventors. 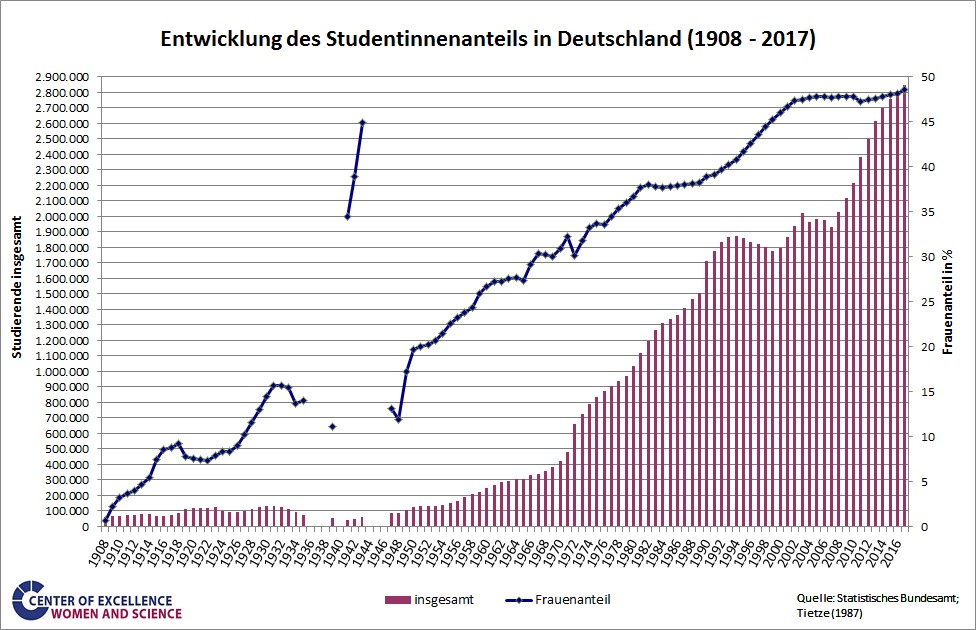 Fig. 3: Percentage of female students in Germany from 1909 to 2017. Source: CEWS (Center of Excellence Women and Science). Source: www.gesis.org/cews/unser-angebot/informationsangebote/statistiken/.[11] There are no figures available for the years 1940 an

Melitta Bentz is often cited as a renowned example of an innovative woman from the early days. She invented the coffee filter and, with her first name, immediately supplied the matching brand name "Melitta Kaffeefilter". In 1908, she applied for a patent for it at the Berlin Patent Office and founded the company named after her in the same year. Melitta Bentz was able to act more freely in the slipstream of a strengthened women's rights movement than the generations of women before her could, and she took advantage of this opportunity with a good sense of business. Today, the Melitta Group11  is a worldwide operating enterprise. And yet Melitta’s invention had been a lucky idea in the context of kitchen and cooking, i.e., typical “girls’ stuff“. Home and hearth were one of the few domains granted to women in 1900.

Patents applied for by women today can be found in all technical fields of science. The following idea comes from a young Uruguayan inventor and deals with intelligent livestock farming. This invention by Victoria Alonsopèrez can make the work of Latin American cattle farmers a lot easier, for it brings digitization to the South American prairies with their huge herds of cattle. 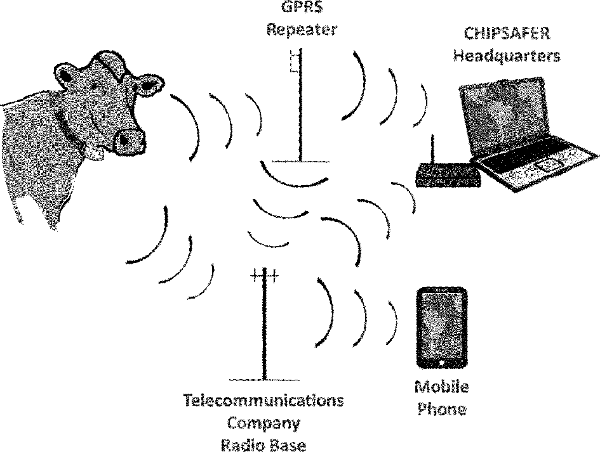 Her idea is an information system tailored to the needs of cattle barons. Each cow of a herd receives an autonomously working transmitter (necklace) that which sends the animal’s individual identification, geographical location and its vital function data, e.g., body temperature, to a server. In this way, health and movements of each individual cow can be recorded and controlled in real time, enabling the farmer to intervene in a targeted manner if necessary. With this information, the outbreak of bovine diseases can be stopped at an early stage by separating sick animals from the herd. Livestock theft is detected more quickly and can be prevented at best. The system’s name is called CHIPSAFER,12 the start-up founded by Victoria Alonsopèrez is called ieetech.

Who would have thought a hundred 100 years ago that a woman’s invention could ever successfully enter a men’s world like that of the Latin American gauchos? What started with the first women at universities has become a success story for women in research, despite all political and social obstacles.