Annually, outstanding innovations are honored with the Inventor Award of the European Patent Office. This year, amongst others, the prize was awarded to the Danish inventors Peter Holme Jensen, Claus Hélix-Nielsen and Danielle Keller. Their resourceful invention (EP 1885477 and EP 1937395) serves for water treatment and is modeled on natural processes. Core of the innovation is a membrane coated with aquaporins. Aquaproins are proteins which are present in all creatures and cell membranes. Aquaporins let water pass through the membrane but retain other molecules and salts. With this aquaporin membrane it is possible to clean water without high energy input. This new form of water treatment can be used for the conversion of seawater into drinking water as well as for the production of ultrapure water for industry. Also, within the Leibniz Association intensive research is devoted to the field of water treatment. The Leibniz Institute for New Materials in Saarbrücken conducts research in the field of drinking water abstraction. Under post doc Prof. Dr. Volker Presser the method of capacitive deionization is investigated and will be further developed. For this purpose, salt water is passed through porous activated-carbon electrodes.

Simply by applying a voltage of 1 V the charged particles are removed from the water and retained in the porous activated-carbon electrodes – what remains is fresh water. The activated carbon, a main element of the technology, is a cheap and renewable raw material. Compared to conventional sea water desalination methods, this solution is particularly energy-efficient.

However, there are situations in which the best technologies for water treatment do not help. Then PAUL  comes into play. PAUL saves lives. It weighs only 20 kilograms and does not need any electricity. Also, PAUL can easily be transported and handled by everyone without any problems. The name PAUL stands for Portable Aqua Unit for Lifesaving. It is a portable water supply in form of a backpack, developed by the University of Kassel.

The concept is simple: on the top one can fill in contaminated water. At the drain cock drinkable water can be extracted after a short while. PAUL can filter 1200 liters of water on a daily basis and is able to supply drinking water to about 400 people. A filter membrane within the device has microscopic openings that filter most of the bacteria, e.g. the cholera pathogen. The water backpack eliminates 99 percent of all germs. Doctors Without Borders and other aid organizations successfully apply Paul in crisis regions if the water supply has collapsed.

So many innovation activities in the field of water treatment are notable. This raises the question if there is an increasing demand for clean water. What is the current situation of the world´s water supply?

Increase of Severe Weather – Either not Enough or Too Much Water

Two thirds of the earth are covered with water. Apparently water is plentifully available. However, only a small fraction (2.5%) of the global water resources are fresh water and thus suitable as drinking water. The large remainder is seawater (saltwater) and therefore not suited for direct human consumption. The reservoir of fresh water is stable, but unequally distributed. In Northern Africa, the Middle East and parts of Asia there is already a shortage of water.

Also, there has been an increasing water shortage in the south west of the USA over the past years, as current media reports emphatically confirm3. In many regions, the growth of population, intensive irrigation of agricultural areas and increased per capita water consumption as well as climate-induced changes in rainfall lead to a proceeding water shortage. On the other hand there is an increase of extreme weather situations. Also, floods caused by extreme rain or tsunamis lead to a pollution of drinking water.

Water is defined as the raw material of the 21st century – liquid gold. Therefore, it is staggering that people in many parts of the world carelessly deal with water: Valuable water is polluted by toxic waste from factories, trash, over-fertilization and excrements – this contaminated water can no longer be used as drinking water. It makes people sick. Clean drinking water is becoming a scarce commodity.

Using the premium patent databases of STN InternationalSM, the world´s leading online service for patent and research information operated by FIZ Karlsruhe4, we are able to conduct a precise search by using its advanced search capabilities. The results represent the current state of the art in science and technology. Hence, the above question can easily be answered by a patent search in STN International. The following graph shows an explicit increase of patent publications in the field of water treatment from 2004 to 2013.

So far the numbers for the year 2014 are not available yet, but the patent applications will probably remain on a quit high level equal to 2013.

The technical treatment and cleaning of contaminated water and its transformation into drinking water is supposed to achieve what does not work in the natural water circulation anymore. Governments and countries that can not or only insufficiently supply their own population with clean water will increasingly have to buy these technologies to prevent violent clashes over drinking water in the future.

According to the earth security index5 a lack of water can lead to a political destabilization of a certain region with the risk of a military conflict over short drinking water. This pressure generates an increasing market for technical solutions of water treatment and the production of drinking water. The possibilities here are manifold: for treating the water there are biological, physical, chemical and membrane-based procedures. These also include desalination. 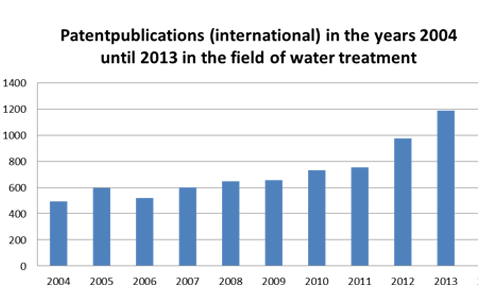 The cross-country distribution of patents

Where are trends and needs recognized early to invest in water, the "liquid Gold" of the 21st century? The following statistical analysis (Fig. 2) clearly shows that in Asian countries, primarily China, there is a huge market for technical solutions for water treatment. Most of the patents in this field are filed in China, Japan and Korea, i.e. more than 60% of all applications worldwide. It is easy to explain this dominance because there is an increasing need for clean drinking water in Asia. Already 60% of the world´s population live there. 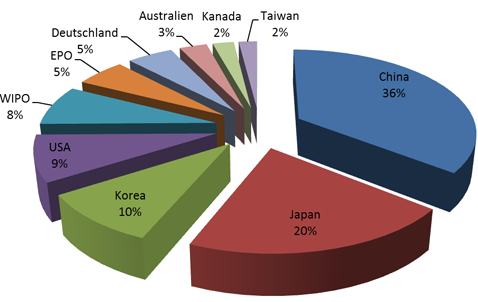 If one considers the increase of patent applications in the field of water treatment it is easy to recognize that the struggle for the "liquid gold" has begun and that the claims have been pegged out.